Traditions and customs of the Ukrainian wedding 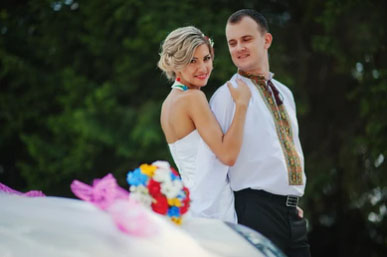 Ukraine is famous for its distinctive customs and beliefs, a significant part of which is observed to this day. Colorful memorable holidays, mystical rituals, and, of course, the Ukrainian wedding will not leave indifferent anyone who has attended these events at least once. The wedding ceremony for every nation is one of the most significant events in the life of any person. In our article we will consider all the main rituals of this celebration, which is an integral part of the culture of the Ukrainian people.

After the lovers have decided to seal their union by marriage, the groom's relatives come into play. First of all, it is necessary to obtain the consent of the bride's parents for the marriage. For this, according to tradition, older men from the young man's side get together and pay a friendly visit to the girl's house. The groom does not go inside, he remains standing near the hut. Sometimes the groom is invited to meet and chat with him.

According to the ritual, matchmakers must take with them a freshly baked loaf, which is a sign of their good intentions. A loaf of bread is laid out on a snow-white towel and a leisurely conversation begins. The conversation is between the heads of families, they can be the fathers of the newlyweds, their uncles or brothers. The dialogue must be structured in such a way as not to receive a pumpkin, which symbolizes the girl's refusal to marry. If everything goes well, the bride cuts the bread brought with the words: "I cut this loaf to give you my vow, and you accept me as your daughter."

Slices of bread are laid out on a towel, which finally confirms the positive response of the bride. Matchmakers, in turn, answer with the traditional speech: "Thank you pretty girl for embroidering such a wonderful towel." At this, the most important stage of preparation for the wedding ends, then they already agree on the bride and the engagement.

This ceremony takes place some time after the matchmaking. Close relatives of the girl gather and go to the house of the groom. By tradition, the parents of the young man try to create a friendly atmosphere in the house in order to win over the bride's family. In response, the girl seeks to demonstrate her skills as a good housewife, showing her culinary skills and nimble housework. 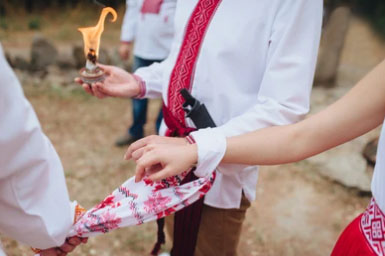 The engagement before the wedding is equally important. In this ritual, third-party witnesses are necessarily present, who can later confirm that the final consent was obtained to conclude an alliance between the young. During the ceremony, the newlyweds are tied up with a towel, which represents a strong marriage bond. After that, the bride presents the matchmakers with symbolic gifts: scarves, towels and shirts embroidered with patterns.

On the eve of the wedding celebration, the girl gathers her friends to say goodbye to her carefree youth and enter into an adult married life. Most often, this ritual takes place in a bath. The bridesmaids bathe the newlywed, comb her hair, and she conducts a traditional Ukrainian ceremony before getting married: she is sad and crying in front of her friends about the carefree life that is leaving. After the bath ritual, the bride begins to weave an amulet for good luck - bright ribbons and candies are tied to a twig. Such a talisman then becomes a mandatory decoration for the wedding table of the newlyweds. 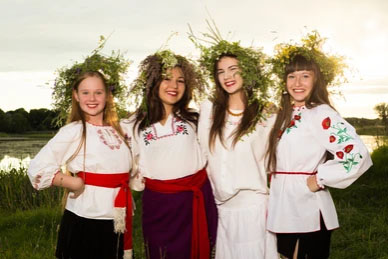 Ransom of the bride

The bride ransom ritual is a traditional Ukrainian wedding custom. On the day appointed in advance, the groom goes to the house of his betrothed. On the way, he is met by numerous relatives of the bride, acquaintances and friends who demand a ransom from him. The groom presents everyone he meets on his way with sweets, coins, towels and scarves.

Directly in the house of a beloved young man, special tests await him, which his father-in-law arranges for him. To be convinced of the physical abilities of his son-in-law, the groom is offered, for example, chopping wood, plowing a piece of land, raising a barrel of water, and tricky questions and riddles are asked to assess the mind and ingenuity. After successfully completing all the checks, the future husband takes the bride by the hand and goes with her to church.

The rite of pouring water under the feet of the young

After the end of the wedding, the newlyweds leave the church under a festive fireworks made of coins and grains, which guests of the celebration shower them with. This ritual, as a rule, is accompanied by the custom, when the parents of the bride and groom pour water under the feet of the young. Water serves as a symbol of purification and sanctification for newlyweds on the path to a happy family life. 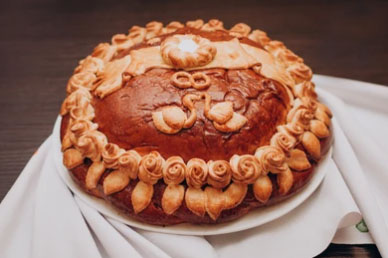 Since ancient times, the traditional occupation of Ukrainian girls was weaving and embroidery. One of the most popular elements of everyday life in Ukraine is a towel, which is widely used in the household to this day. Each bride must sew a large number of such towels before the wedding in order to present them to guests during the celebrations. Also, during festive events, loaves and pies are laid out on the towel. The main wedding loaf is placed on the most exquisitely embroidered towel. Luxurious bread and superbly embroidered snow-white towel personify the material well-being of the family.

A wedding loaf is a special bread made according to special recipes for celebrations. It tastes great and looks luxurious at the same time. After cooking, such bread is decorated with special baked elements: viburnum leaves, wheat ears and two wedding rings. Viburnum leaves promise the continuation of the family, millet - prosperity and wealth, rings - the strength of marriage.

The funniest rituals of the Ukrainian wedding include the "Boots" ritual, in which the groom takes special actions to win the favor of his mother-in-law. This ceremony begins with the future son-in-law buying new boots. On the solemn wedding day, the groom invites his mother-in-law to the most prominent place in the hall where the celebration is held, and thoroughly washes her feet. Then he puts on the boots prepared for this ritual to the mother of the bride, showing by this an attentive and respectful attitude towards her. All these actions are accompanied by folk dances and songs, thus adding fun and enthusiasm.

The tradition of unweaving braids

Unweaving a girl's braid is an old and ingrained custom at a Ukrainian wedding. According to tradition, after the official wedding events, the mother-in-law and husband carefully remove the wedding crown with ribbons and unweave the bride's braid. Then the mother of the young husband braids the girl's hair around her head in a semicircle and ties it over with a scarf, which symbolizes that the girl is already married. The removed wreath is thrown towards the bridesmaids. According to popular belief, the one who catches him will become the next newlywed. 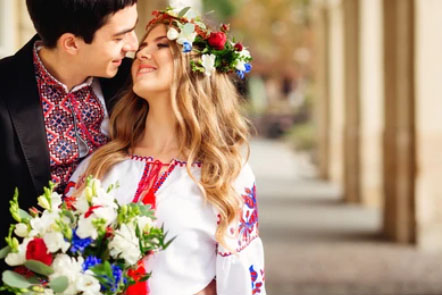 Ukrainian wedding dresses of the newlyweds

Embroidered fabric is a traditional element of the original culture of Ukraine, embroidered with fancy patterns of flowers, leaves and birds. Such jewelry represents a happy family life, longevity, wealth, love and prosperity. People call this fabric embroidery. Party dresses for the bride and groom are also made from richly decorated fabrics. The clothes are decorated with intricate patterns, for the execution of which multicolored silk threads, ribbons and beads are used. Some patterns also have a special magical protective function. In the process of work, dressmakers use various complex techniques: satin stitch, cross stitch, hemstitch. The result of this work is a beautiful and harmonious pattern.