Culture and mentality of Russian women 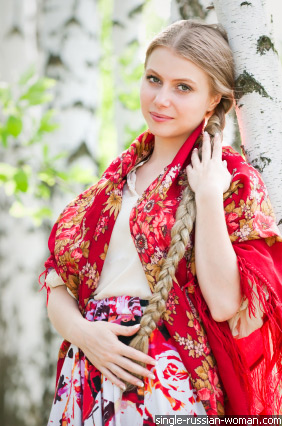 To know characteristics of a modern Russian woman, one may address the Russian history, the features of the Russian mentality, the Russian literature and art, the features of the Russian life. However, there is always a probability to roll down to generalizations and declarations of stereotypes. There is an opinion, that the the Russian women are kinder, easy, attentive, more thoughtful, more focused on a family than the representatives of other nations. It is certainly so, however one should remember, that every woman is a bright individuality and the orientation exclusively on stereotypes can be a mistake. Among Russians there are ladies of different temperament, different life goals and different ambitions. However there is something in the Russian women, that strongly distinguishes them from those of other countries.

The western men married to Russians, agree that the the Russian women are fine wives, they are kinder, more economic and carefully twist "a cosy nest", cook tasty home food with pleasure. But the western ladies also take care of families, also manage the home business. Then, what distinguishes them?

FEATURES OF NATURE AND CULTURE

Kindness, sincere delicacy of the Russian women, readiness to understand other people in many respects are defined by a life of the Russian people. Many foreigners still consider Michael Zoshchenko, who described the life of Russians of the 20s-30s of the XX century, a science fiction writer. Meanwhile, municipal apartments - when several families live in the small area divided into tiny rooms, with one toilet and a bath for all is not such a rarity even now. Not everyone has a separate apartment. According to the western parameters these apartments are tight even for one person. In Russia families of 4-5 persons lives in a modest two-room apartment of the area of 58 square meters. Quite often some generations simultaneously live in a tight small-sized flat. In Russia the saying "In narrowness, but not in insult" is popular. The Russian conditions of residing give rise to feeling of special unity when it is necessary to reckon all time with others, to accept others such as they are. The Russians are used to be patient to the people around. The Russian people grow in conditions of dependence on the others' needs. Russians possess a unique ability of adaptation, especially it concerns women. The conditions, seeming intolerable for foreigners, are perceived by the Russian people as due. For this reason the Russian wives are very patient and always ready to compromise in their home life. The situation which will be regarded by the western woman as infringement of her interests, may be ignored by the Russian woman. The Russian wife is always ready to a compromise. This sincere mobility and patience is peculiar to Russians which is often lacked by the western people.

The majority of the Russian women regard the family more than a career. It resulted both from education and from the Russian mentality, and influence of the Russian literature and canons of Orthodoxy. And even the Soviet legislation inherently denying religion and proclaiming an equality of sexes, promoted a family priority for women. It was very difficult, practically impossible for a woman to rise over the career ladder - all places were occupied by men. Raising the birth rate, the Soviet state provided the world's longest maternity leaves to women. The Russian people strongly thought, that a woman should have a family. Even the well-known women who brought the huge contribution to science, art, religious knowledge were considered unfortunate if they were not married and did not have children. Roughly speaking, the Russian ballerinas who opened a female body of unusual beauty in dance, the nuns who gave life to service to the God and a spiritual enlightenment, talented singers and actresses, women-teachers and organizers are considered unfortunate if they do not have a family. The Russian woman, even achieving considerable heights in the career, financially secured, creatively and intellectually realized, feels defective if she does not have a family. The huge quantity of successful Russian women would change with pleasure the high professional position for the status of a western housewife. Marriage agencies receive millions of letters in which the women who have made quite a good career, declare themselves unfortunate and cultivate complexes because of no family. The Russian women in the majority feel uncomfortable, if they have to command people (especially men), be active and show virility. The women who finds courage and will to show rigidity and confidence, being at authority, are called "mannish" in Russia and their female charm is denied. The majority of the Russian women would willingly refuse own career in favour of the husband's career . They would provide home cosiness, care and support to the head of family. The Russian woman really embodies an image of "a home keeper" and "assistant to husband". Beauty as Way of Life The Russian women even on usual week-days dress smartly and tidier than the western women (by the way, Russian ladies often do not suspect it, judging foreigners by attractive glossy magazines, representing stylish and elegant ladies and gentlemen). Visitors from the West are surprised with a huge quantity of beautiful, elegantly dressed ladies in the Russian streets. They do not hurry to a pink tea, to a holiday, theatre or fashion presentation. They go to work to usual offices, hasten to a lecture in the institute, in library or in shop. These ladies are not confused with rough, dirty roads in rainy weather when they put on shoes on high thin heels. They are not frightened with the stuffy, overcrowded buses when they put on a beautiful blouse and pin a graceful brooch on it. The secret is that the beauty for the Russian ladies is a style of life, instead of an opportunity to earn money. The Russian girl is beautiful because does not imagine life without beauty. It is necessary like air for her. The Russian lady does not dress up "occasionally" to make impression. Russians always aspire to beauty. If the Russian woman has no money for a fashionable thing from a boutique, she would run all over the city and would find the stylish thing which has attracted her in the market or in a less expensive shop. If she does not find a finished thing, she would sew it, having bought a fabric or would even cut the old thing from the "grandmother's chest". Only Russian ladies can, after a tiresome working day and evening efforts at home, to sew a new dress or knit a blouse. During the Soviet times when shelves of the shops were empty and it was impossible to get beautiful, stylish and fashionable things, the Russian women showed miracles of needlework, working with old grandmother's sewing machine with manual operation, working with a hook and knitting needles. The German fashion magazines (for example, "Burda" and "Verena") were very popular - in them, there were most beautiful, fashionable models and the most exact patterns. Such magazines were a huge rarity and if someone had such magazine, a line of persons willing to take the magazine for the night and make a copy of patterns "was built " for a month ahead. Despite of deficiency and empty shops, the Russian woman tried to be dressed beautifully, as well as the husband and children. All the matter is that the need for beauty is a soul's need of the Russian women. The Russian beauty goes from inside and is combined with feminity and charm.

Coziness and warm home atmosphere is a point of honour of the Russian housewife. The woman considers the house a continuation of herself, as a symbol of a happy home life. In Russia they still do without services of servants. The majority of the Russian women are engaged in cleaning of an apartment, cooking. They often do manual repairs. And the Russian beauties are capable to improve the dwelling with a painting brush or spatula. The Russian woman always tries to make her house light, clean, joyfull. Going to restaurants and cafe in Russia are considered, more likely, as cultural actions, the event, instead of the habitual phenomenon. Ordinary citizens do not go to restaurants "simply to eat". The majority of the Russian families eats at home. It can be explained both by the material reasons and a habit of Russians to eat tasty home food. Besides, a rare Russian woman would make an uninvited person stand at the threshold. She would necessarily feed him, ask about his life, share news. Russians try to always have food at home, and long years of deficiency have accustomed Russians to do food stocks. The Russian woman is inventive in cookery. Many recipes of Russian cuisine were not born from abundance but from the shortage of products on the shop shelves. The Russian housewife seldom strictly follows the recipe - if it is possible she replaces missing products for others, having transformed the recipe for available products. The Russian women are famous for skill to prepare a tasty dish "from nothing". A lot of Russian families have a country site which do not serve as vacation spot, but a place where greenery, vegetables and fruits are grown up. Usually, they are some distance from the house where they go by car or by bus. The Russian woman knows how to correctly plant and grow up potatos, onions, carrots. In many apartments since early spring, there are sills boxes with sprouts of tomatoes, pepper flaunt on the windows - with approach of heat the plants will be bedded in the country site. The Russian woman is capable to work all days off in the country site, being even more sturdy than a man. On Monday she comes to work with manicure, elegantly dressed and gracefully brushed. From the products which have been grown up in the country site, the Russian woman does preparations for winter - compotes, jam, vegetable salads, marinaded pepper, cucumbers and tomatoes. Jars with these culinary masterpieces wait for winter in pantries and cellars. Russians are hardworking and hardy. They can have two jobs, have time to be engaged in household, education of children, work on a personal plot of land, but at the same time look attractive and feel a heroine. The Russian woman perceives these loadings as due, she does not feel she is doing something special. Russians got used "to survive" in heavy conditions, joke about difficulties. Owing to features of the life in Russia the Russian women are remarkable for raised psychological mobility, endurance, patience and ability to understand others.