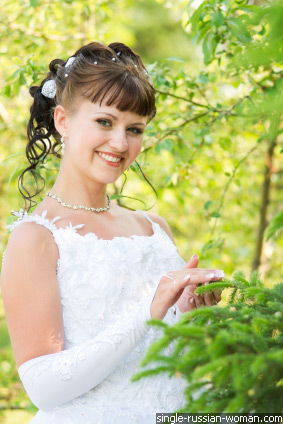 The Russian brides search for the beloved, father of children. Women aspire to create a happy family and realize themselves as a wife and mother. Some category of men should be mentioned, who have created in imagination a fantastic image of the Russian bride, mismatching the reality. There are men thinking, that for the Russian bride there is only one important thing - residing in a safe country which makes her close eyes on obvious discrepancy of the partner to her desires. Such men write to women of 20-40 years younger than themselves, braving first of all with their material welfare and thinking, that the attractive Russian girl will agree to become the wife to any man if he is a foreigner for the sake of foreign citizenship. The percent of women, wishing to marry only to leave from the country, is very insignificant. And those who do it, usually understand the mistake soon, and such marriage comes to an end with disappointment for the both parties. Generally, women realize that the adaptation in the other country is difficult enough and do not want to have unloved husband in this country. The Russian brides search for a person who could become a beloved husband, head of the future family. The fact, that he is from a safe country means much, but not decisive.

The Russian ladies looking for a husband abroad, can be of any age. However, most of all they are young women from 18 till 40 years old. This rule especially extends to the women looking for a husband through the Internet independently. Stable access to the Internet in Russia - a rather recent phenomenon. As a rule, active users of the Internet among the representatives of fair sex - young, successful women by the Russian standards, or the students of higher education institutes. Older ladies address matrimonial agency, as a rule, which are their mediators. Among those looking for a foreign husband there are women who perfectly know English (not only English) . But there are a lot of women, and a greater percent, who know only basic knowledge of a foreign language, still go to school or institute. The language barrier often interferes with active search of a husband and duly reply to letters. If a woman addresses a marriage agency, the agency translates and replies in Enlish for them. However, the women, firmly intended to marry a foreigner, usually quickly do successes in studying foreign languages. The Russians learn English easier, than the European or American do Russian. The majority of the Russian women looking for a husband abroad, possess a greater self-estimation, than their compatriots. These are purposeful, optimistical, loving a life women aspiring to greater life. Certainly, the fact of searching for a husband abroad does not define a level of consciousness of the woman in itself. But the majority of such women consider themselves worthy of safe family, loving husband, confidence in future, stability. They do not often wish to encourage display of man's chauvinism in some Russian men. Nor they like men, suffering inferiority complexes because of inability to afford a family. The Russian ladies appreciate the foreigners' belief in themselves, optimism, respect for a woman, a skill to look after, love children. By the way, about children. Certainly, a great bulk of the Russian fathers, as well as all fathers in the world, love their children. However a situation when a man, leaving a family, leaves his own children, is not a rarity. The legislation makes them certainly pay the alimony on the child. But the alimony assesses only official incomes of men which do not always correspond to the reality. The alimony sums do not suffice even for food. The father is not interested in the life of the child, does not feel responsibility for it. The care of the child entirely lays on the shoulders of mother. Getting divorced with wife, the Russian husband often "gets divorced" with own children. Certainly, it does not always happen, but such situation in Russia is not a rarity. The cases when after the divorce the child stays with the father are singular.

There is a number of reasons why the Russian women search for a husband abroad. The first reason - demographic. In Russia there are less men of age of consent, than women. Certainly, there is no comparison with the post-war period when millions men were lost, battling for the native land. But today, according to the statistical data, men in Russia die earlier, they are more subject to a serious disease, among which the heart one is in the first place. In the remote regions the situation is even worse. The problem of "shortage of husbands" is discussed at the state level. Separate bright politicians quite seriously suggest entering a polygamy into Russia. However, such way out is certainly unreal - first, because of the natural desire of women to have a high-grade family, secondly, because of objective impossibility of men to afford such "greater family". Some women agree to a humiliating role of a mistress maintaining relations with the other woman's husband, hoping that one day the man will leave the family and marry her, suffering from own compelled immorality and feeling faulty (in Russia there is a popular saying: "You will never build your happiness on the others' misfortune "). Those who do not want to be a mistress have to search for love abroad.

The second reason - "features of the Russian national character" of the Russian men. It includes bad habits of many Russians , and special psychological features of the Russian men. The love of the Russian men to alcohol has become legendary. Certainly, it does not mean, that in other countries there is no problem of alcoholism. But Russia is still the leader in intensity of using spirits. One can often see, that "an abstemious man" becomes almost the main criteria under the choice of a partner. There are women (especially in Russian backs) who are ready to close eyes to absence of other advantages of the husband, feeling lucky that the husband does not drink. The alcohol abuse of the Russian men can be explained by many reasons among which the basic is the stress at the background of economic instability and frequent inability of the man to adequately afford the family. Quite often the men compensate their inconsistency with alcohol. They also drink due to boredom. Traveling, hobbies often demand material investments, and an average family spends practically all funds on keeping body and sole together - food, clothes, payment of municipal services. Even qualitative treatment and education of children appear excessive for many Russians. Therefore, feasts with plentiful effusion of wine become their basic entertainment. The alcohol abuse often results in early death rate of men. It is statistically proved, that in Russia people are more careless about their health than in other countries. "The features of the national character" of the Russian men are caused by the objective demographic reasons and Russian mentality. In Russia, there is no feminism in blossom like in the West. Formally in Russia there is an equality between men and women. However, in practice women often are under pressure of men and are in more humiliating position in comparison with them. Men occupy the majority of high posts, men are treated with much greater confidence in the business world, men are considered cleverer and obviously above women. An unmarried man at a mature age is honourable, such man represents huge value; the unmarried woman at the same age is blamed and condemned. Importance of the status of "a married lady " forces many Russian women to suffer neglect and roughness from men. The Russian men respect women much less, than the western men. It is explained by not only the features of mentality, but also by the absence of corresponding laws in Russia. Yes, the Russian men are good at courtship if they want. But it is frequent in the Russian families when the woman looks after the man. The woman charges itself with problems of earning money, education of children, efforts in household, and at all this she suffers frank roughness and disrespect from the husband. And all because of the illusory importance of the status of the "married woman"! Those women who wish to be "self-realized" - loving, loved who are not going to do man's functions search for a husband abroad. Besides, the economic instability in Russia provokes such qualities of the Russian men, as active condemnation of rich people, envy to rich and disbelief in themselves. In the West, men face smaller problems under self-realization. In the West, there is no problem "how to afford the family" as it is in Russia. In Russia, often talented intellectual people cannot earn enough money even for the family's essential needs. The high material prosperity of some citizens in Russia is often connected with infringement of moral norms. It provokes in Russian men a feeling of hopelessness, insult to destiny, disbelief in themselves. And all negative emotions are in turn worked off on the most close people. Certainly, not all Russian men are such, by no means! However, these "features of the national character" are in a varying degree peculiar to many Russian men. The third reason is already mentioned unstable economy in Russia. The women are tired of beggarly Russian salaries, of impossibility to provide worthy existence to themselves and the family, and they decide to search husbands abroad. In Russia even clever, capable, talented people often live very poorly. The natural desire to have a happy family, a stable financial position, children to whom they could provide worthy conditions for life and self-realization, forces women to search for husbands outside the country. The majority of women are guided by the above reasons or some of them. The women searching for husbands abroad can be conditionally divided into two groups. The women of the first group have decided to leave Russia and create a happy family with a foreigner. The women of the second group simply want to get married and use all methods of acquaintances. They search for their half both in Russia, and abroad simultaneously.